Dream Machine, Southbank and a Sea of Burroughs. ‘Mona Lisa Smiles’ is Released and the Thames is Calling

It’s been a while since our last blog and there’s so much to talk about! Firstly… we’re delighted to be special guests at the Xmas Boat Party by our dear friend Klarita of Kaparte Promotions, with the fabulous Ernesto Tomasini as a DJ and in the fine company of R in Parenthesis (Fabrizio Modonese Palumbo’s solo project) on the London leg of his Winter European tour. Fabrizio has worked with David Tibet, Little Annie, Matmos, Xiu Xiu and Ernesto himself to name a few!
Join us on December 7th for this very special date at the Ship of Fools Club and it’s set to be Raf and O’s last gig of this year!
TICKETS
FACEBOOK EVENT

Last month, O and I got to perform at the Queen Elizabeth Hall! Part of the Literature Festival on the Southbank, the ‘gonzo gala cut-up evening’ to celebrate 100 years of William S Burroughs was masterminded by the one and only musician/ actor Richard Strange. A tremendous event, we were incredibly honoured to perform alongside a brilliant cast of musicians, actors and writers including Bill Nelson, Sarah Jane Morris, The Doctors Of Madness, Anni Hogan, David Coulter with Seb Rochford, Rupert Thompson, the original Black Rider band and Gavin Bryars. All performed and/or presented new material. The spectacular ending saw “a procession of WSB guitarists descending from the audience” and a sea of Burroughs (UV fluorescent WSB masks, which were handed out to the audience in the break) loomed large.
In darkness we mounted a drum riser, which was rolled to the front of the stage. The lights came on and Raf and O performed ‘Dream Machine’, our Gysin/ Burroughs inspired piece to a packed, attentive, house!
A real thrill and a show to remember in so many ways, a massive thanks to Richard Strange for asking us to be part of it! And thanks to the people  who took part, the crew, the audience and all who supported the event.
Another special thanks go to the brilliant journalist David Stubbs who has been regularly supporting us in the last few months. Very thankful for his words.

“I was at the QEH for a Burroughs night, where I saw Raf Mantelli and O Richard Smith, aka Raf and O, deliver a superb if too short set to the large and appreciative audience they really deserve.” – David Stubbs

Thanks to Christina Jansen photography (http://www.cjansenphotography.com) who captured splendidly the whole event. See photos below.
Futher thanks goes to Peter Cook who wrote “Simply superb Raf and O, a new talent which must be seen” and Steve Ash “The duo Raf and O followed with some more Burroughsian music entitled Dream Machine bringing the show back to its high quality musical base”. Very sadly, Steve passed away shortly after the show and more recently, Stoner, the bass player from The Doctors Of Madness (who had re-united for this show after 36 years) has also left this Earth.

Following on from the QEH, Richard  invited us to return to the legendary Cabaret Futura and we’ve recently played a live set in the very lovely settings of Battersea Barge, supporting Robinplayschords who has just released his debut single. A 12″ version which also features a remix by Raf and O will be out early in the new year.
In the meantime we’re really happy to announce our latest musical work and contribution to this excellent release of remixes and reconstructions. ‘My God It’s Full Of Stairs’ on Mark Beazley’s beautiful own label Trace Recordings is OUT NOW! It features Raf and O’s ‘Mona Lisa Smiles’, a five and a half minutes rework and reconstruction (with added vocals and instrumentation) of BLK TAG’ s album ‘A Distilled + Debilitating Loneliness’. It also features works from Rothko, Gagarin, Fabrizio Modonese Palumbo, BLK w/BEAR and many others! You can now listen and grab yourself a copy HERE!

Sea you on the boat!
X
Back to RAF AND O’S BLOG/ NEWS PAGE

Photos by Christina Jansen, at http://www.cjansenphotography.com

When we wrote about our memories of the festival in our last blog , we mentioned a new video was on the way – here it is, all the way from the Beckenham bandstand!
Raf and O perform a micro rendition of David Bowie’s ‘Memory Of A Free Festival’ and ‘Lady Grinning Soul’.
Huge thanks to Luigi Altilia for filming. Further below – ‘Beckenham: Free Festival at bandstand jogs memories of a star man’s arts scene’. 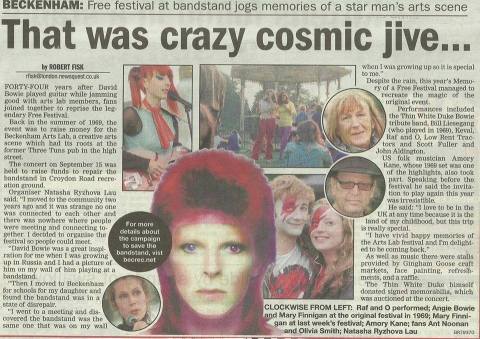 Thanks goes to Wendy Woo for sending the newspaper clipping from the day above.

And from the iconic victorian bandstand to the stylish art deco settings of The Ivy House in Nunhead. Keeping it live in the South East, Raf and O will be performing next, at the excellent Kaparte Oxjam Festival- a great line up, alongside Ernesto Tomasini, Gagarin and more. Friday 18th October, a night of experimental and electronic music, avant-garde entertainment, visuals and djs. All proceedings will go to Oxfam. For details, address, tickets and FB event, please see our LIVE PAGE.

See you there!
X
Back to RAF AND O’S BLOG/ NEWS PAGE

You are currently browsing entries tagged with ernesto tomasini at Raf and O.