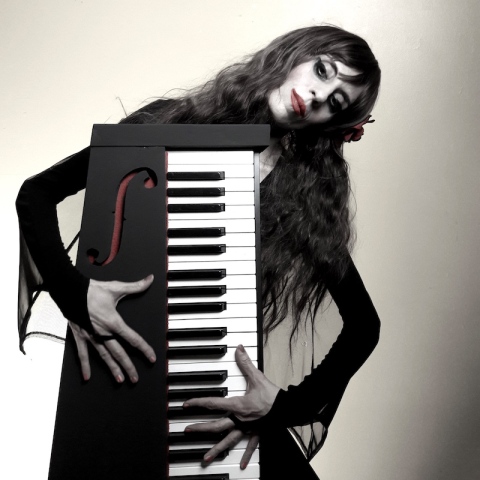 July greetings from Raf and O!

This year we’ve been very busy getting a new project off the ground:
The Kick Inside (TKI)!
This is an entirely separate music outfit, named after Kate Bush’s first album and it’s a tribute to the artist herself!
We’ve also been busy with Raf and O and you can read more on the latter part of this blog.

I’ve been doing a lot of piano playing recently on the latest and beautiful addition to the instrument roster: a lovingly converted piano keyboard by O featuring f holes!
Last May we announced it on our facebook page – As well as cracking on with writing material for our 4th album, and reinterpreting favourite artists, mainly David Bowie interpretations, I’m starting a tribute to the music of Kate Bush, where I will sing and play piano extensively, focusing on the early part of Kate’s career and this time, keeping faithful to the original pieces.
Since then we’ve got a new TKI page up and running and just over a week ago we released our very first video, recorded live in The Warm Room, which received a great reception.

“Raf Mantelli one half of our favourite avant-garde and frayed experimentalist duo Raf and O adds her idiosyncratic, enchanting signature to the music of Kate Bush on her latest project, The Kick Inside. Concentrating on Bush’s early career, the focus being on her ‘core essence as a pianist singer songwriter’, The Kick Inside tribute band will soon be announcing dates for a number of performances. In the meantime, here’s a teaser” Monolith Cocktail

The Kick Inside, as well as the solo show, will also perform as a duo and here, O will be alongside me but in a role that may be a surprise for many amongst you.

THE KICK INSIDE LINKS

In the meantime…
Raf and O will return to Italy to play a small series of shows and look forward to go back to some favourite places during the tour! We will debut some new material and there will be a few surprises along the way too! Already looking forward to seeing friends old and new and very excited about the set we will be playing!

As well as developing the TKI project we’ve been also writing material toward a new album; this has been keeping us focused in the studio, so it was lucky if you managed to catch Raf and O playing earlier this year including the legendary experimental Klinker Club and a charity show to raise awareness on mental health for Punk4MentalHealth at the UnderDog Gallery.

Our own cover interpretation of David Bowie’s ‘The London Boys’ received radio play on the latest Chaos Theory Radio Show where Kunal was joined by Alan Pride for a selection of cool tunes! It was also aired on the  Dexter Bentley Show Resonance FM and our Bowie’s cover of ‘Win’ was aired, again on Dexter’s ‘The Day Before’ , a tribute to David which also featured an extract from Mary Finnigan’s book ‘Psychedelic Suburbia: David Bowie and the Beckenham Arts Lab’ plus an interview with her; we were deeply touched by Mary’s words for Raf and O who introduced us on the show. And lastly, Raf and O’s Magic from our latest album Portal that was mastered at Cage studios is included in a new free to download compilation ‘Cage 24’ by Martin Bowes from Attrition, pioneers of darker electronica.

For fresh up to date news join our Raf and O social media pages,  FB  and  Twitter and watch this space!

You are currently reading The Kick Inside – Kate Bush Tribute Live Outfit and Raf and O Tour in the pipeline at Raf and O.